History Of The Portable PC

When Sterling Computer Sales started into the portable PC business, the desktop computer was front and center with no real competitors there were no notebooks to challenge the dominance of the desktop computer. Everything new and improved came to the desktop first. IO Interfaces such as printer ports serial ports were a must for the desktop computer soon all relevant components and enhancements came to the desktop. PCI interface cards were built for every conceivable industry. What could be moved to the computer was quickly adapted there. I remember the video production and high speed image capturing PC’s required ever increasing power and storage. The 486 CPU processors were pushed to their limit Memory upgrades were essential to handling rendering of CAD programs and images. Memory components were some of the most expensive and essential ports of the desktop. Before the internet became available all computing and resources were contained on the desktop computer. Therefore, self contained applications such as accounting software CAD programs Microsoft Work and the like were all loaded on the desktop PC.


A demand started to develop in providing a portable computer that can take the desktop on the road, keeping the features and capabilities the same as the desktop computer. This was not an easy task since desktop components were developed without a sense of miniaturization. Components were designed to be reliable first. Shock and vibration concerns are not important when it comes to desktop components, after all the desktop just sits there and works. Here comes the portable PC the first hurdle was to accommodate the size of the desktop components. Most main-boards dictated a certain size such as ATX or micro ATX. Now since the size could not be changed dramatically and keep the reliable functionality of a desktop computer portable pc’s were desktops with a handle. A few companies emerged that offered features and enhancements that would make a portable pc more valuable. These features were shock mounting components and light weight materials such as aluminum. The weight and size were still not a great advantage over the desktop PC but one could take a powerful desktop on the road to accomplish remote tasks such as testing. High speed imaging was one of the first industries to take advantage of the powerful portable desktop. Sterling built several versions of portable PC’s for Olympus high speed cameras to capture explosions and other fast moving events. We even saw an event capturing the muzzle projectile with a high speed camera. These accomplishments were possible with a PCI interface card built by a camera company for a desktop PC then transferred to a Portable PC at this point the portable PC has become a product with multiple applications.


From the portable PC, a notebook or laptop pc is developed. These are radical departure from the portable PC Components. Now motherboard components are miniaturized and still offer printer ports and rs 232 serial ports just like the desktop but the overall size and space a are much reduced. They also share the desktop keyboard and viewing screen that is so necessary on a portable PC. What differentiates the Laptop from the Portable pc is the PCI slot. By eliminating this component one can reduce the size dramatically. Therefore The portable computer is still essential if PCI interface cards are needed for a portable application task. Some early laptops contained one or two PCI slots to offer the feature of a portable computer in a much smaller package. These platforms were quickly abandoned due to reliability problems. They were replaced with PCI docking stations for Laptops.


Laptops were soon replaced with notebooks. These notebooks were designed to use different CPU’s hard drives and other miniaturized components. They were also becoming reliable but lacked the power of a portable pc. Each generation filled a gap that was necessary to expand the computing power of users in industry. The leading portable computer company offering a full range of portable computers. 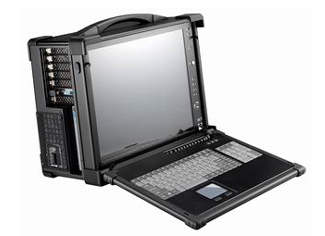 
Contact Us today to discuss a custom build lunchbox computer for your business.

Looking for a company to provide a custom portable, rackmount, or computer solution, please contact us today to learn more about our capabilities.